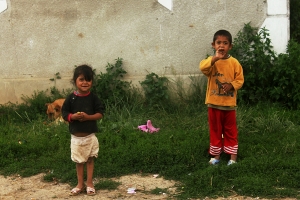 One’s first impression when entering a Roma community is shock at the poor living conditions. Shelters seem to be constructed of anything readily at hand, and multiple families with children may share a single room. Most of the people do not read or write well. The vast majority are unemployed. With little food, one wonders how the people manage to survive. It is into such a village that God brought Tomorrow Clubs and HOPE International together to partner toward a big goal. God has moved our hearts to reach out to the Roma children, and through them, expand our connections with adults in the community.

Until recently, Romania has been the only country where God has allowed Tomorrow Clubs the privilege of working with Roma (formerly called Gypsy), children. But earlier this month, we were able to serve Roma children in western Ukraine through a Tomorrow Clubs English camp. 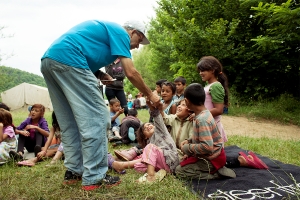 When we began to plan this camp, only one American volunteer signed up for the opportunity and we wondered if we would have the workers necessary for the camp to take place. Miraculously, God provided a great team of eight Americans from three states who traveled to Ukraine to teach English and share God’s love with the children. Despite many challenges, including heavy rain every day, poor living conditions, and the very real concern of personal property theft, God used the camp for His glory and the good of volunteers and attendees alike.

The five-day camp took place in a beautiful, natural setting in a Roma village near the town of Seredne. About 150 kids attended, leaving the American, Ukranian, and Roma workers physically exhausted by the end of each day, but praising God for the open hearts of the Roma children. 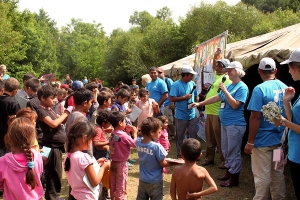 On the first day, the kids were unruly and difficult to settle down, but with each day we saw how much more they were paying attention to the Bible lessons and how much they were learning. They were like little sponges, soaking everything in – memorizing Bible verses, repeating each English word the American teachers would say, and running up to hug many of us. Despite rainy weather, especially during the middle three days, kids kept coming and the rain never prevented the sharing of the Gospel during the Bible time. We felt we were living witnesses of God’s grace and miracles!

One day we realized we had many more children for lunch than we had planned food for. We had also learned that local children typically only eat one meal per day and are continually hungry. We had no idea how we would feed this hungry crowd. One of the leaders suggested we pray and ask God for multiplication of food as Jesus had done in His earthly ministry and we witnessed an amazing work of God! Instead of feeding the 180 people we had planned for, we were able to feed about 250 people. And there was even food left over! We were all amazed and encouraged by God’s gracious provision. 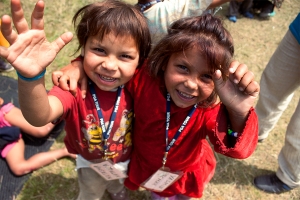 On the fourth day of camp, eight Roma children repented and trusted Christ. What a wonderful reward to see these disadvantaged children find eternal hope through faith in Jesus! On top of that, 35 parents from the Roma community came to the closing program where they heard a clear presentation of the Gospel and watched as their children showed off some of what they had learned during the camp.

We have learned from local Roma Christians that many of the Roma people want to change their way of living. They desire to become educated, find employment, and stop abusing alcohol and drugs. They are weary of the way they have been existing. HOPE International is planning programs to help with education and money management, while Tomorrow Clubs plan to open 3 new kids clubs in the fall. We know that the only hope for lasting change comes from a relationship with God through Jesus Christ, so all of our efforts have that eternal goal in mind for those we serve.

Please pray for the little village of Seredne, for the Roma people, and for the eight kids who repented during the camp. Please also pray for the new Tomorrow Clubs beginning this fall, and for the workers and children in this poverty-striken village who are in such need of the true hope found only in the Gospel.