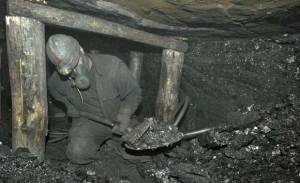 Three years ago, the Tomorrow Club in Bryanka hosted about 40 children weekly. Most local men worked in the thriving local coal mining and distribution industry. Their occupations were often dangerous, but hard work allowed these folks to provide comparatively well for their families. Women usually were able to devote their time to homemaking and child care. The local Evangelical church had always been active in evangelizing the community, resulting in more than 100 unchurched kids being reached each year through Tomorrow Club camps.

Life abruptly changed, however, when pro-Russian rebels led by Russian military officers took control of Bryanka in 2014. Today, life is difficult for all residents, with churches and professing Christians facing unique challenges. 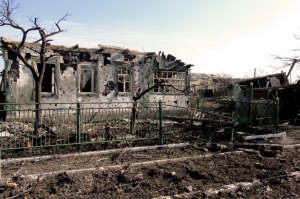 Many homes were damaged by shelling and explosions, and many civilians left the city for their safety. Rebels claimed to care about local residents, but in fact often stole their cars, jewelry, and even home appliances. Those who protested these robberies were accused of being American spies. Resistors could be thrown into a ‘basement’, which is a sort of pit where hostages are held. Police report many tortures and at least 17 civilian deaths, with many hostages still missing or unaccounted for. All coal mines were closed, with the machinery disassembled and sold as scrap by occupying forces. Not only did local men lose all opportunity for employment, many also fled to avoid being forced to join the rebel army. Now most of the local children are raised by female or elderly relatives.

The danger of being a believer in Christ in Luhansk Oblast and Bryanka lies in the fact that pro-Russian rebels often consider Christians to be American agents. Under this accusation, the church of the neighboring town of Antrazit had their building confiscated. There have been multiple cases of Christians being tortured and killed in the area. If local Christians accept humanitarian aid from the Ukrainian government, they are at risk of being identified as siding with pro-Ukrainian government and military. Besides these military threats, believers (and all residents) in the region have experienced harsh winter conditions without adequate heat and with only minimal food supply, as the area where the fighting occurs is only 20 miles from the town. 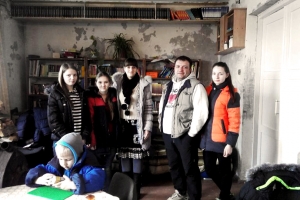 By God’s grace, church members and TC leaders realize that God is in charge of every event that enters their lives. They continue to faithfully mentor the 30 kids who are weekly club attenders. Sadly, there are no male leaders remaining, and two elderly female leaders, Olga and Ludmila, have significant health issues. But leaders report with joy that God is at work! Recently, the unbelieving mother of a girl who attends Tomorrow Club meetings began attending Bible study, and she often stays for the entire meeting, where she is able to hear the Gospel. Church members and TC leaders have teamed together to help local residents, and are finding that many hearts are open to the Good News of Jesus. Tomorrow Club leaders, encouraged by this alliance with church members, are committed to continuing their work and trusting God for more fruit. 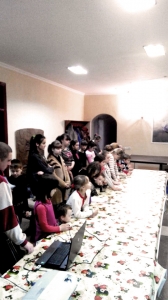 Leaders are also encouraged to see kids’ lives transformed by the Gospel. About six months ago, three new kids joined the Bryanka Club. Anya, a 13 year-old girl was invited by one of the leaders. Soon, she brought Vitalie, her 12 year-old brother and Polina, their 8 year-old sister. When these siblings first joined the Club, they often misbehaved and were not very interested in memorizing Scripture. When leaders learned more about the family situation, it became evident that TC meetings were one of the few bright spots in their lives. Their father lost his job in a coal mine when the war broke out. Then he was diagnosed with tuberculosis, which requires a long and expensive treatment impossible to obtain in occupied territories. Both parents are alcoholics, compounding the already tragic life of this family. 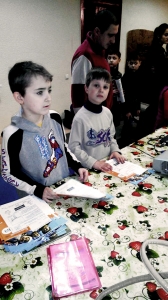 Praise God that now Anya, Vitalie, and Polina say they understand that everything that happens comes from God. They willingly explore and memorize Scripture, participate in all club activities, and are doing much better in school. Despite the fact that the situation in their family remains very difficult, they now smile and often joke. Tomorrow Club leaders have also been able to help by providing food and clothing, and when making home visits, they have the opportunity to invite the parents to church.